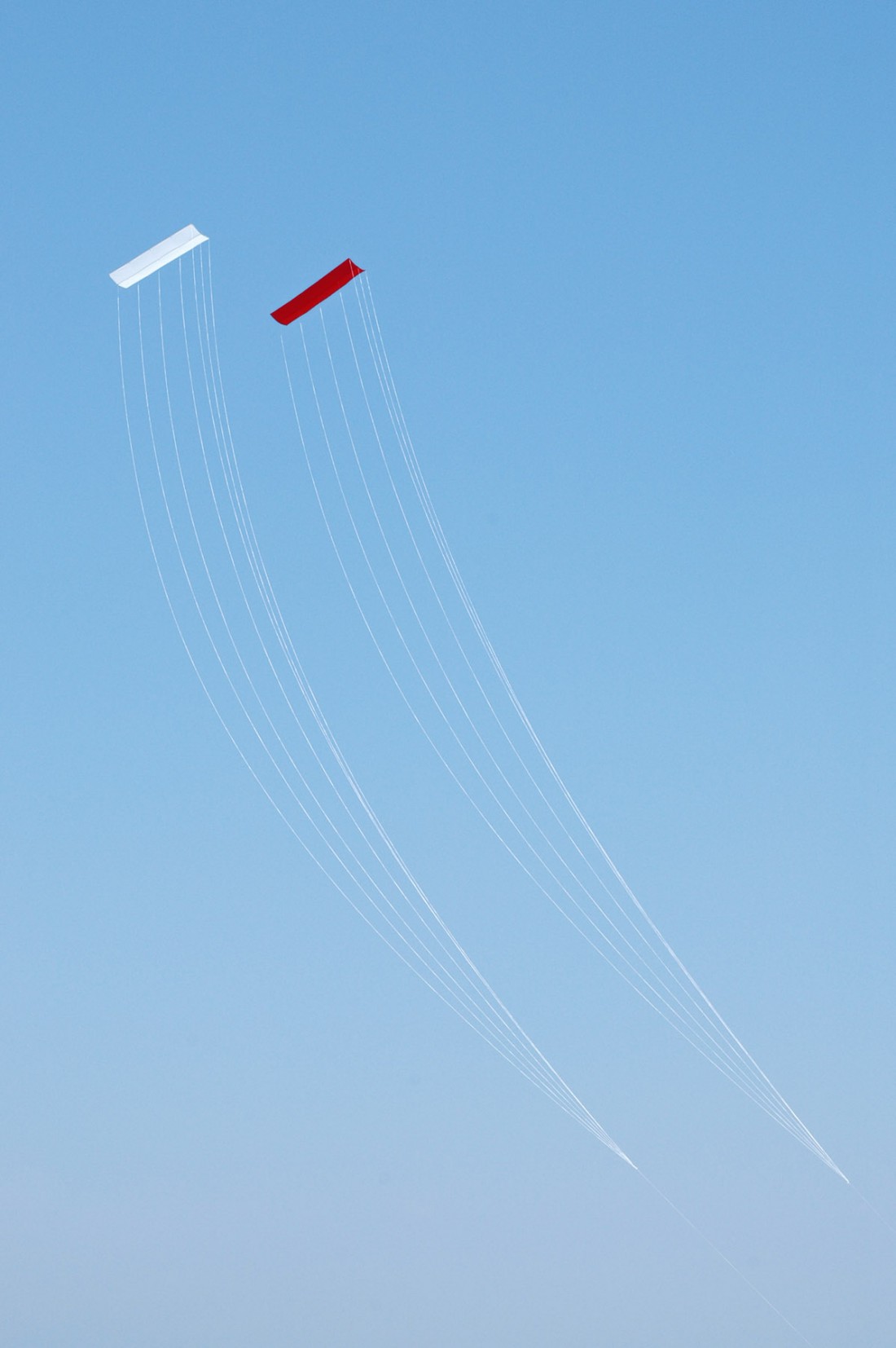 In 2003, I made a series of 16 red and white kites for a temporary installation at 101 California Street in San Francisco, CA. Subsequently, I installed the kites in two other venues: the Weisman Art Museum in Minneapolis, MN, and San Antonio College, about 3 blocks from my home and studio in San Antonio, TX. Photographs of these installations can be found HERE.

The kites are based on traditional Japanese designs. They are made of ripstop nylon sailcloth and fiberglass spars. Each measures 8 feet by 2 feet. The 7 arching strings that make up their bridles are approximately 100 feet long. This network of string orients the kite to the proper flying angle and introduces the drag necessary for stable flight.

On a beautiful sunny day in June of this year, I flew two of the kites for the first time near Galveston, TX. Due to their traditional origins, I expected them to perform well (unlike many of my more unusual designs, which often fail in dramatic fashion the first time out). I was not disappointed, the kites flew remarkably well and I vowed to fly and photograph more of them in the future. Photographs from this day can be found HERE.

On December 2nd of this year, as part of a weekend birthday celebration in Port Aransas, TX, I rallied some friends to help me fly a larger group of the kites. It was not a beautiful sunny day. In fact, it was cold, overcast, and very windy. Yet these intrepid volunteers persevered for many hours packing and unpacking kites, taking photographs, and primarily, untangling the miles of string that make up the kites’ bridles.

By the end of the day, 10 kites were flying, staked to the beach approximately 40-50 feet apart. What would have taken a couple of hours in calmer weather, took us the entire day due to the gusty, variable conditions. Only one kite pulled its stake (it definitely would have been lost without the heroic sprinting effort of my brother-in-law Sean Lyons).

Due to the overcast sky, photographing this endeavor was difficult. As evidenced by the photos taken earlier this year, the kites’ white bridles are considerably more visible against a blue sky. However, the day itself was a tremendous success and I want to thank everyone who came out to help. Despite blowing sand, cold hands, and a slightly ambiguous goal, the day was filled with laughter and good spirits. The photographs, found HERE, were taken by Larry Graeber, Kelly Lyons, Scott Martin, Denise Pope, and myself.