I am interested in the behavior of light. Sometimes a camera records light in a way that our eyes do not see. In this capacity, the camera becomes an extension of our own senses, helping us to perceive a fundamental element of our existence in novel ways. Generally, the camera requires a subject – a stage upon which to project light. Over the years I have worked to simplify that stage, to isolate a subject in a way that focuses the viewer’s attention on the light itself. Soap Bubbles is the continuation of this work, the latest in a series of experiments with light, photography, and chance.

This series exploits an optical phenomenon that occurs when visible light is distorted by the thin film membrane of a soap bubble. Soap bubbles deconstruct daylight, amplifying some wavelengths while canceling others out, creating an array of color that speaks the complexity and mutability of what we see as ‘white’ light.

Light waves, like ocean waves, have peaks and valleys. All waves have a curious property: if two waves combine, they can meet each other crest-to-crest, amplifying their power, or they can meet crest-to-trough, canceling each other out. When they meet crest-to-trough, for every “up” vibration in one wave, there is a corresponding “down” vibration in the other wave. This combination of equal ups and downs causes cancellation, or destructive interference. If the crests of two or more waves are in step, or almost in step, they will combine into a larger, more intense wave. This is called constructive interference. A combination of constructive and destructive interference is responsible for the pearly luster of an abalone shell, the beautiful colors in some bird feathers and insect wings – and for the complex colors seen in a soap bubble.

A bubble’s colors are caused by a phenomenon known as thin-film interference. When light bounces off the wall of a soap film, there are reflections from both the front (outside) and back (inside) of the film. Interactions between these reflections, constructive and destructive interference, cause the colors we see. The specific colors are directly related to the film thickness – thicker bubbles will display blues and greens, thinner bubbles, reds and yellows. Due to the influence of gravity, a soap bubble’s walls are thinnest at the top and thickest at the bottom. This variation results in the tremendous variety of color we see.

Within the playful form of a soap bubble, daylight is deconstructed and re-assembled. As a bubble is tossed and turned by the wind, its shape and thickness are constantly changing, creating ephemeral and unpredictable patterns of color. The bubbles, and the photographs which record their brief existence, become a lens through which we witness the complexity of daylight. 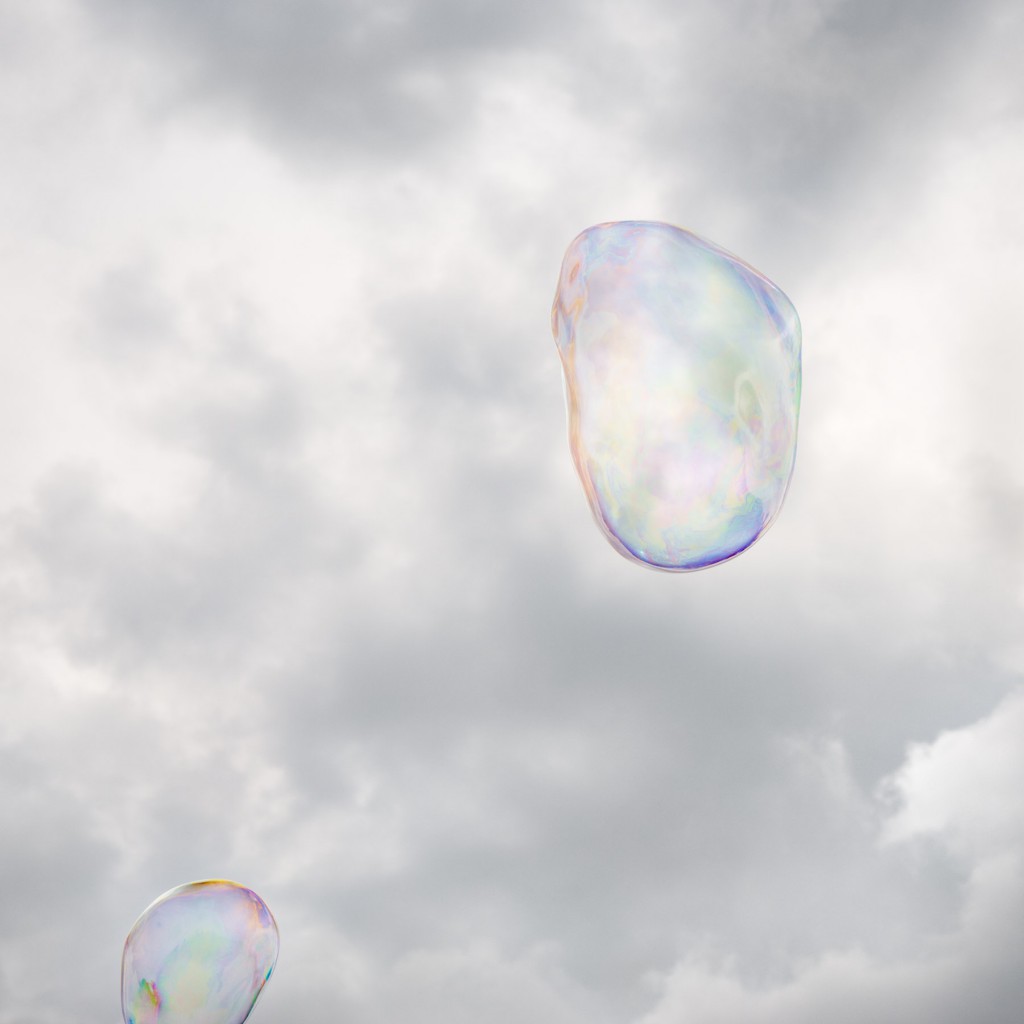