It is rare that photography looks like magic anymore, but at Stuart Allen’s Dance Lines strangers are asking each other, “How did he do that?” This series of black and white photographs traces the movements of dancers across the space of the museum’s Grand Ballroom—a spectacular Victorian-era chamber replete with blooming columns, intricately carved layers of molding, and a floor with various colors of hardwood set in elaborate geometric patterns. Allen uses long exposures, sometimes lasting 20 or 30 seconds, so that when the dancers, equipped with battery-powered bright light suits the artist designed and fashioned himself, cross the frame, the “light-line” is captured, the dancers rendered invisible, and the architecture is recorded as the stage.

At first, it is startling to see such evidence of life as the light-document, yet such absence of personage. But having the human subject removed from the photograph makes the actual subject clearer: Allen is interested in movements across spaces during a period of time. He removes the limitations of the dancers’ bodies, extending their presence across the composition, and exploits the mechanics of the camera, recording a length of time and actions in one single shot.

The eye is easily led to animate the hurried, temporal lines. Polka is a scribbled crown that hits all four corners of a woven square in the elaborate wood floor. Waltz looks like curling cake icing, and Ballet (Saut de Basque) is a line of synchronized light-lassoes. Other pieces have more flat-looking repeated patterns like methodical brush strokes or handwriting practice, like the chain of cursive S’s in African (Senegalese) or the consecutive Z’s inSamba. Tango (Argentine) shows an arching chain of rectangles against the geometry of the hardwood floors. “Oh, I can see where they come together,” I overhear one viewer say to another. A closer look at this piece reveals illuminated scuff marks on the floor—evidence of Victorian balls gone-by. It is an obvious jump to recognize the Dance Lines in this historical setting as ghosts. Yet the images do communicate an essence that is authentic, and they are aesthetically interesting enough to keep you looking long enough to relate to that common urge to dance exuberantly.

When this dance-democratic feeling hits you, it is easy to forget that Allen works with highly trained dancers who move and hit every mark precisely; this series is not the product of spontaneity. Allen studied dancers, dance styles and the traditional sequences within those styles for an extended period of time to determine which movements would leave the most interesting “light lines.” He had originally intended to complete this series in a darkened studio, but found the Crocker’s Grand Ballroom provided an opportunity to add another layer of meaning to his study.

At this show, the viewer experiences, in his or her own time, the Dance Lines, which took many moments to create, but all exist at the same moment in each work. And this collection of moments exists in a space where countless people created their own dance lines for more than a century. The viewer contemplates his or her place in this history of movements in this space as he/she walks by one of the mirrors in the ballroom, and sees a snapshot of his/her visit to the exhibition reflected.

– Originally published in Artweek.
No part of this essay maybe reproduced or reprinted without the permission of the author. 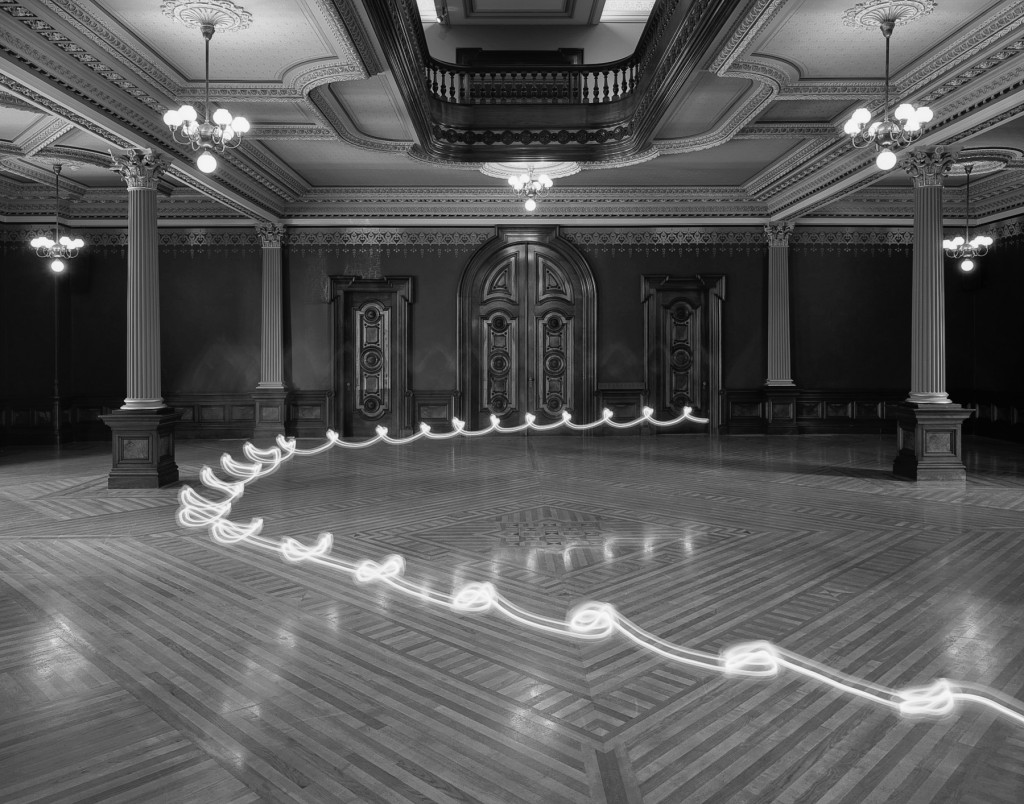