Stuart Allen’s (born 1970) photographs deal with fundamentals of light, gravity, space and time. These transitory elements are culled from two basic sources, landscape and the human figure, which bring the enormity of these ethereal cosmic forces into a more intelligible realm of human experience. More specifically, it is Allen’s interaction with these sources that make his photographs both deeply personal, yet broadly contemplative.

Allen’s most recent work, called Dance Lines, consists of a series of large-scale, black and white photographs made on-site in the Crocker’s ballroom. These images seem concerned primarily with the exuberance of dance and the majestic space dedicated to it. While both of these issues certainly play a role in the imagery, the primary purpose of the project was to explore the relationship between movement, space, and time. Building on the artist’s previous investigations of time-based motion — Night Lines (1997 – 1998) and Studio Lines (2000 – 2001) — this new series maps the movement of dancers through the medium of light. Using long exposures, Allen renders the dancers themselves invisible; all that is left to record their performances are the dynamic trails of illumination. This changing and intangible light from the performance, when captured on film, attains a permanence that haunts the space it animates.

A sculptor as well as photographer, Allen creates flat and three-dimensional work equally concerned with the interaction of forms in their environment. His buoyant mobiles of wood, steel, and sailcloth, chart the movement of objects through space, an interest informed by the openness of the Kansas landscape where he grew up and the kites he once flew there. It is ironic then that Allen should have begun his career by studying a static art form — architecture — at the University of Kansas in Lawrence. Following his architectural training, Allen pursued photography and video at the Kansas City Art Institute. After graduation, he moved to California and in 1994 settled in the relatively rural community of Woodland, California, where he lived and worked in the midst of wide-open nature. Recently, Allen has undertaken another major move, this time to Mexico. There, he plies the Sea of Cortez in a sailboat as a way to experience space and the elements, physically realizing his artistic goals on a Promethean scale.

One of Allen’s first major photographic series, Night Lines, was based on the landscape. The series grew out of the artist’s previous work dealing with the movement of air. In this work, the artist introduced kites, large pieces of silk, and smoke into photographs in an effort to make the complex currents and eddies of the wind visible. As Allen shifted his focus to the movement of water, he found that floating fabric in a moving creek simply did not maintain the subtlety and grace of the material floating in space. During this experiment, it occurred to him that a long exposure of a light floating down a creek at night would create a trail and document its own path, a trajectory that could be captured on film. Allen expounded upon this premise in creating Night Lines — nocturnal landscapes informed by dynamic light trails. These trails follow existing lines within the landscape such as the natural contours of creeks, roads, and lakes. As the manipulator of the light, the artist himself became a primary component of the photographs — albeit an invisible one — and the images document Allen’s interaction with nature and the earth’s topography. Having grown up in an “out-of-doors” family, the artist is, admittedly, a modern day transcendentalist, and believes in a perspective and insight that can only be gained through nature.

In developing his work, Allen drew upon the example of British environmental artist Richard Long (born 1945) whose art records his direct interface with nature’s topography. Drawing a geometric shape on the map, Long walks the line exactly as he drew it, staying as close as possible to the shape he created, rather than following the path of least resistance. English artist Hamish Fulton (born 1946) another important influence, also walks in order to experience time and space, taking photographs along the way. So too does Allen, allowing the earth to dictate his path and inform the light patterns he creates as he walks. In some instances — such as when he drops a lantern into a creek and sends it downstream — Allen takes this idea one step further, allowing physics to do the work. These experiences and involvement with the environment become as important as the result, but this in no way implies that the resulting photographs are not visually compelling objects. Allen, a consummate craftsman and esthete, culls, edits, and prints with precision before putting forth the finished product.

In the artist’s next major series, Studio Lines, Allen created light trails without an obvious external referent. Based on the dimensions and movement of the artist’s body, the patterns in the photographs act as a stand-in for the artist. The light lines are, in a sense, self-portraits, depicting the artist’s movement and presence, rather than his actual appearance. Images of spinning, bending, or gestural sweeps of the arm capitalize on photography’s ability to compress a span of time into one frame. On film, these light patterns exist as geometry. Their abstract relationship to the human form that created them parallels that of an EKG or seismograph, which trace natural movement in the form of an ever-changing line.

Allen’s fascination with capturing the movement of light on film began early on. As a youth, he remembers being fascinated with Gjon Mili’s (1904 – 1984) well-known 1949 photograph of Pablo Picasso (1881 – 1973) drawing a centaur in space with a flashlight. The long exposure arrested Picasso’s motions into one continuous, flowing line of light, existing only in the photograph — not in reality. Allen also recalls being captivated by photography reproduced in 1970s coffee-table books and magazines. These featured stop-motion imagery and the unique and transient effects of light on film in the form of lightning storms, traffic patterns, or light trails left by aircraft in the night sky. More recently, the work of Japanese-born photographer Hiroshi Sugimoto (born 1948) has stimulated Allen. Sugimoto’s investigations of photography as a time-based medium having static results motivated Allen to pursue similar projects. Some of Sugimoto’s most compelling photographs were made in historic movie theaters. Sugimoto opened the camera’s shutter at the beginning of the film and closed it at the end to produce photographs that rendered the architecture visible and the movie screen completely white. The parallels between this and Allen’s current project are obvious, yet the influence of Allen’s earlier work is also present. In particular, Allen’s dashboard photography experiments were executed in this spirit. In this series, Allen placed a camera on the dashboard of his car with the shutter held open for 200 miles to capture an expanse of movement and space in one static, two-dimensional image.

On a broader level, Allen’s expressive use of light recalls other art-historical processes of mark making. It is in keeping with the action painting of the Abstract Expressionists, particularly the quiet “white writing” paintings of “Northwest Mystic” Mark Tobey (1890–1976). Tobey’s calligraphic paintings in particular seem akin to Allen’s photographs, emphasizing process over subject and tracing the artist’s movements through rhythmic white lines. Tobey was also strongly influenced by Chinese and Japanese calligraphy, which inform Allen’s laconic gestural strokes as well.

While Allen could manipulate the Studio Lines and be fairly assured of the result, the dance sequences were less predictable and required extended experimentation. Each dancer wore a bright light and battery pack that the artist designed himself. Of necessity, the lights were intensely bright to account for the fact that Allen was shooting through a small aperture. Although at times the artist could predict the final product, more often than not the resulting light pattern was a surprise. In order to attain a preview of the final image, Allen would typically take dozens of test shots with Polaroid film before exposing a four-by-five inch negative. Final exposures lasted an average of twenty to thirty seconds, although for some images the camera’s shutter was left open after the dancer’s sequence to ensure that the image of the ballroom was adequately exposed.

Allen mapped various forms of dance by working with specialists in a variety of disciplines, ranging from ballet to swing. The title of each piece identifies the dance performed during the exposure, giving the viewer an opportunity to compare the varied styles of movement. Wanting to retain the integrity of each dance, Allen utilized sequences based on the existing vocabulary of each dance style. He participates in a rich tradition among artists who have studied dance and dancers for use as iconography in their work; however, Allen was more than a passive observer of his subjects. He acted as choreographer, communicating his ideas to the dancers and relying upon their execution. He then became editor to determine the most effective movements for each image, photographing the portion of the dance that would leave behind the most interesting trail. Recording too much of the dance would yield a chaotic line and, eventually, a completely white photograph, so Allen was careful to keep his productions succinct. In one instance, the artist himself became the performer. In this photo, a wildly gyrating Allen relives nights he spent as a “dancer” in a mosh pit, his primary experience with dance before this project.

Allen originally intended to execute this series in a darkened studio, with the resulting lines drawn against a black field. Once provided with an opportunity to work in the Crocker’s ballroom, a space with a long history of dance, Allen determined that the architecture could play an active role in the work. The columns, elaborate woodwork, and ceiling ornamentation brought a historical context to Allen’s photographs and with it new levels of meaning. The space also gave the lines of light a dynamic place to reside. Like Allen, the dancers themselves were inspired by the space and were motivated to pursue the project because of the interior’s history and beauty. In this grand setting, the lines not only memorialize each dance, but evoke images of the many generations of men and women who have left their own palpable presence in the room over the past 130 years.

– Originally published in the exhibition brochure Dance Lines, Crocker Art Museum, Sacramento, CA.
No part of this essay maybe reproduced or reprinted without the permission of the author. 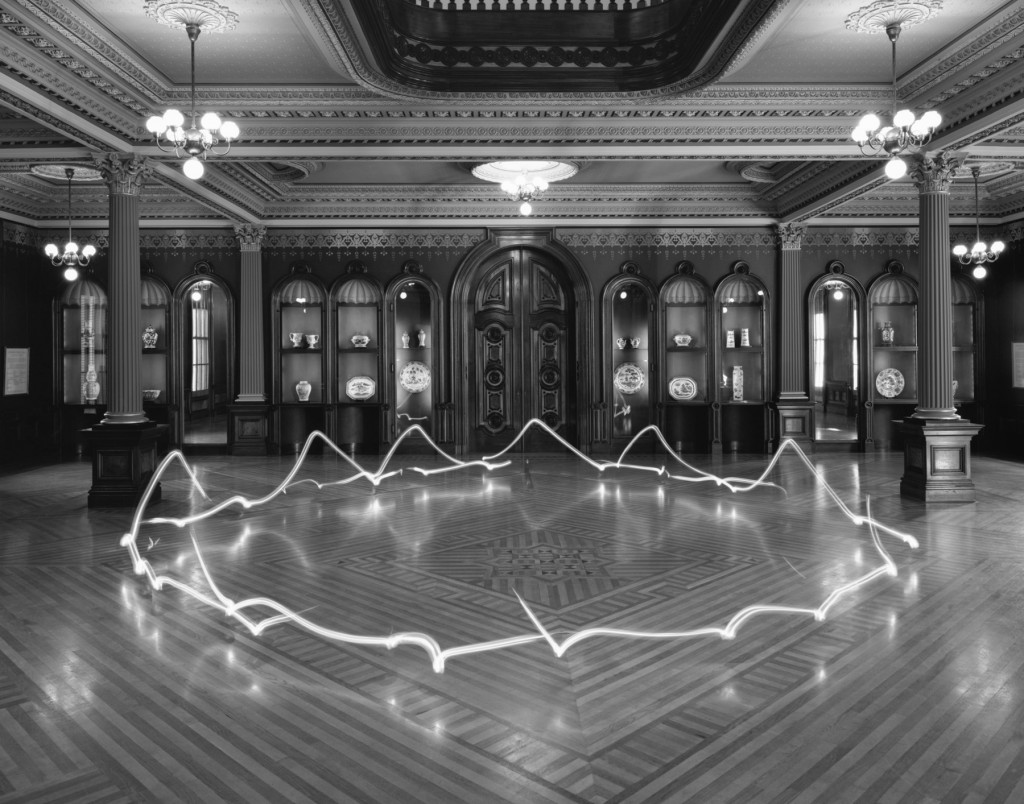