Pigeons bob their heads up and down to perceive depth. This deliberate movement, executed to achieve different viewing angles, is known as motion parallax. By analyzing multiple viewpoints, the animal is able to determine the relative proximity of objects in space. Because our eyes produce overlapping views, humans can perceive depth without moving. Comparing the subtle differences between left and right eye images, our brains produce a complex, three dimension rendering of the world before us. This is known as stereopsis and it provides depth perception without head bobbing. Still, motion parallax plays a critical role in human perception as well.

As a teenager I raced sailboats on midwestern lakes. If you spend any time around competitive sailors you will probably hear the term “making trees”, slang for going faster than your competitor. On the upwind leg of a sailing race – when boats can be some distance apart – it is often difficult to determine who is moving faster. When you watch the shoreline beyond your competition and the competitor’s boat appears to be slipping relative to the trees (i.e. more and more trees appear in front of their boat), you are “making trees” – and this is good, because it means you are going faster. This is also an example of motion parallax; without it we would have a hard time determining relative velocity.

This installation exploits a related form of motion parallax, an auto-animating print known as the parallax panoramagram. The acrylic panels consist of two parts: on the front, a barrier layer with a repeating pattern of thin, opaque lines and, on the back, an image layer containing a sequence of images broken up into vertical strips. As the viewer moves in relation to the piece, the change in perspective displays different sections of the image layer, creating the illusion of movement.

I designed these panels specifically for WindowWorks at Artpace. Because the gallery opens up to Main Avenue and is typically viewed from a moving vantage point (car, bicycle, or on foot), I wanted to activate that motion in a meaningful way. Though the panels themselves are static, the movement of the viewer initiates a dynamic, animated effect. I am interested in this interplay between the audience and art object. Without movement, the work is static. With movement, time and space are activated to create a more complex engagement. Like the bobbing pigeon head, multiple perspectives must be witnessed to achieve the complete experience. 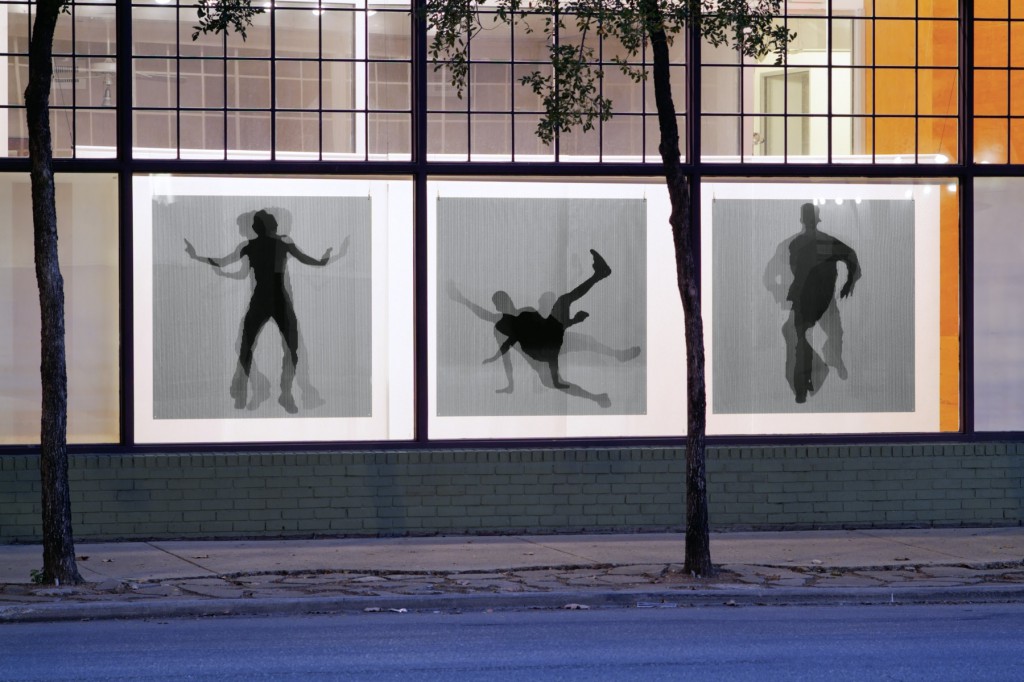