A masterful delineation of the subtleties of perception and the convergence of light and space, Stuart Allen’s site-specific installation, 38° 33’ 05″ N / 121° 43’ 10″ W, housed in the lobby of the City of Davis Police Station is one of Northern California’s more subtle artistic treasures. Inspired by divergent themes, ranging from the elegant simplicity of nautical accouterments to the ethereal levity of a soaring kite, Allen’s installation offers a particularly shrewd, yet accessible synthesis of structural grace and gravitational malleability.

38° 33’ 05″ N / 121° 43’ 10″ W, which Allen terms a “tensegrity structure” due to the tensile interdependence of component parts essential to the work’s seemingly weightless structure, features an innovative use of media and adroit exploration of the relationship between material properties and the aesthetic qualities they convey. Composed of sailcloth, laminated wood and steel cable, Allen’s installation is somehow greater than the sum of its parts due to his deft manipulation of the tractable qualities particular to his chosen media. While preserving graceful clarity with clean lines and light tones, Allen conveys the inherent conceptual complexity of his work by incorporating the impression of movement and weightlessness with taut wires and excrescent segments of rigid sailcloth suspended from the ceiling as if soaring in mid-flight.

By compelling viewers to negotiate the gravitational qualities and physical space occupied by his tensegrity structure, Allen’s work conjures memories of Richard Serra’s imposing sculptural installations. Despite the interest in qualities of weight, mass and gravity shared by the two artists, however, Allen’s work serves as an antithetical complement to Serra’s. Inasmuch as Serra’s work boldly asserts a firmly grounded materiality, Allen’s imparts a more subtle and understated aesthetic quality. More specifically, 38° 33’ 05″ N / 121° 43’ 10″ W conveys an airy weightlessness that challenges the viewer to negotiate the uppermost sector of the room, where it coalesces with the elegant simplicity of the room’s sinuous design.

The great strength of Allen’s work lies in its ability to fuse unobtrusively with its surrounding milieu. His installation’s compositional subtlety and visual clarity complements the subdued minimalist aesthetic of the Police Station’s central lobby and elicits a graceful union of sculptural and architectural space. By exploring the notion of weightlessness as an aesthetic and conceptual category, Allen has developed a well-executed demonstration of the nebulous boundaries between art and science. The multifarious symbolic dimensions inherent in 38° 33’ 05″ N / 121° 43’ 10″ W not only illustrate the peculiarities of perception, but also offer an engaging visual interpretation of the mysteries of flight and gravity that have perpetually captivated humanity. 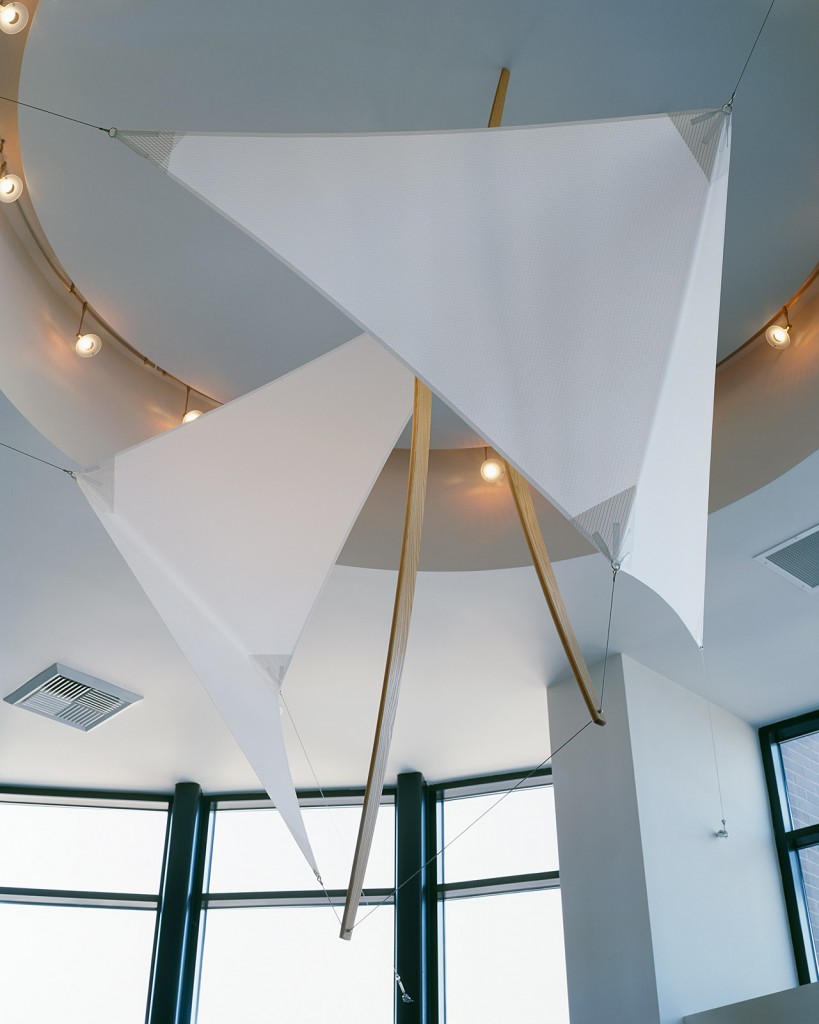